If you can’t stand the heat then get out of the kitchen!!!

END_OF_DOCUMENT_TOKEN_TO_BE_REPLACED

Taking Nigerian cuisine to the world

END_OF_DOCUMENT_TOKEN_TO_BE_REPLACED

It was exciting to embark on trip to New York sans lil’uns in tow. The prospects were endless, first of all I didn’t have to worry about inconvenient, unexpected bathroom breaks, nor did I have to schedule my activities around nap times, melt downs and everything else in between. More importantly my meal selections will be devoid of worries about allergies; real & perceived and disdain for anything green.

Summer was in full swing, my brother was graduating from university, everyone was happy; it was the perfect time to eat and be merry! And we did just that! 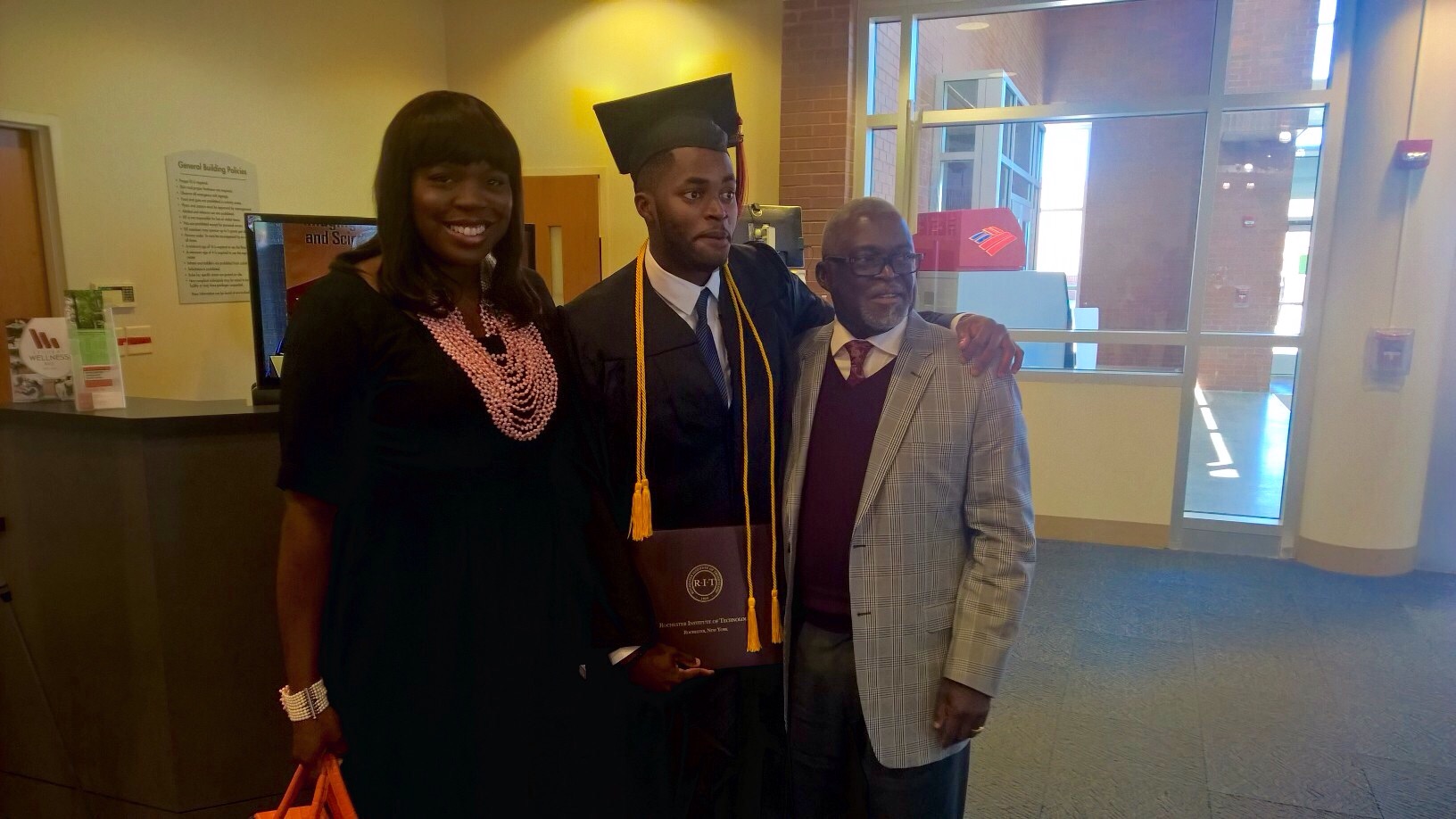 Rochester is not a bustling city but I felt that it would yield surprising delights. Our first meal there was not memorable at all. We went to a steak house called “Sticky Lips”…..I imagined that It would be like those hidden diners that Guy Fieri uncovers on his show “Diners, Drive-ins and Dives”. I even imagined that we might meet his crew there filming or something. Well no such luck. No crew and no Guy Fieri. But I still had hopes for the food. I mean the place was ok. It ticked all the right boxes for quaint furnishing, classic American bar type set up etc., but the food fell flat. I am sorry, everything on my plate felt dry and under seasoned……..not unlike cardboard……..from my previous post, by now you know how I feel about such meals……

I felt a bit anxious and hoped that there would be some redemption for this city and boy was there ever!

So after the grad ceremony in the morning, the girls (Aile, Osi, Uzzie) and I decided to hangout and have a good “natter”. Our hangout of choice was Carrabas. An awesome little Italian restaurant and grill. I had the Mahi Wulfe which was beyond delicious. The fish was cooked to perfection, the basil lemon butter was sublime and the artichoke hearts and seared tomatoes were to die! I was replete and very happy! Things were really beginning to look up!

There was deliciousness all around, the steak, the focaccia, the pizza, the soup, everything was lovely and we all enjoyed our choices. 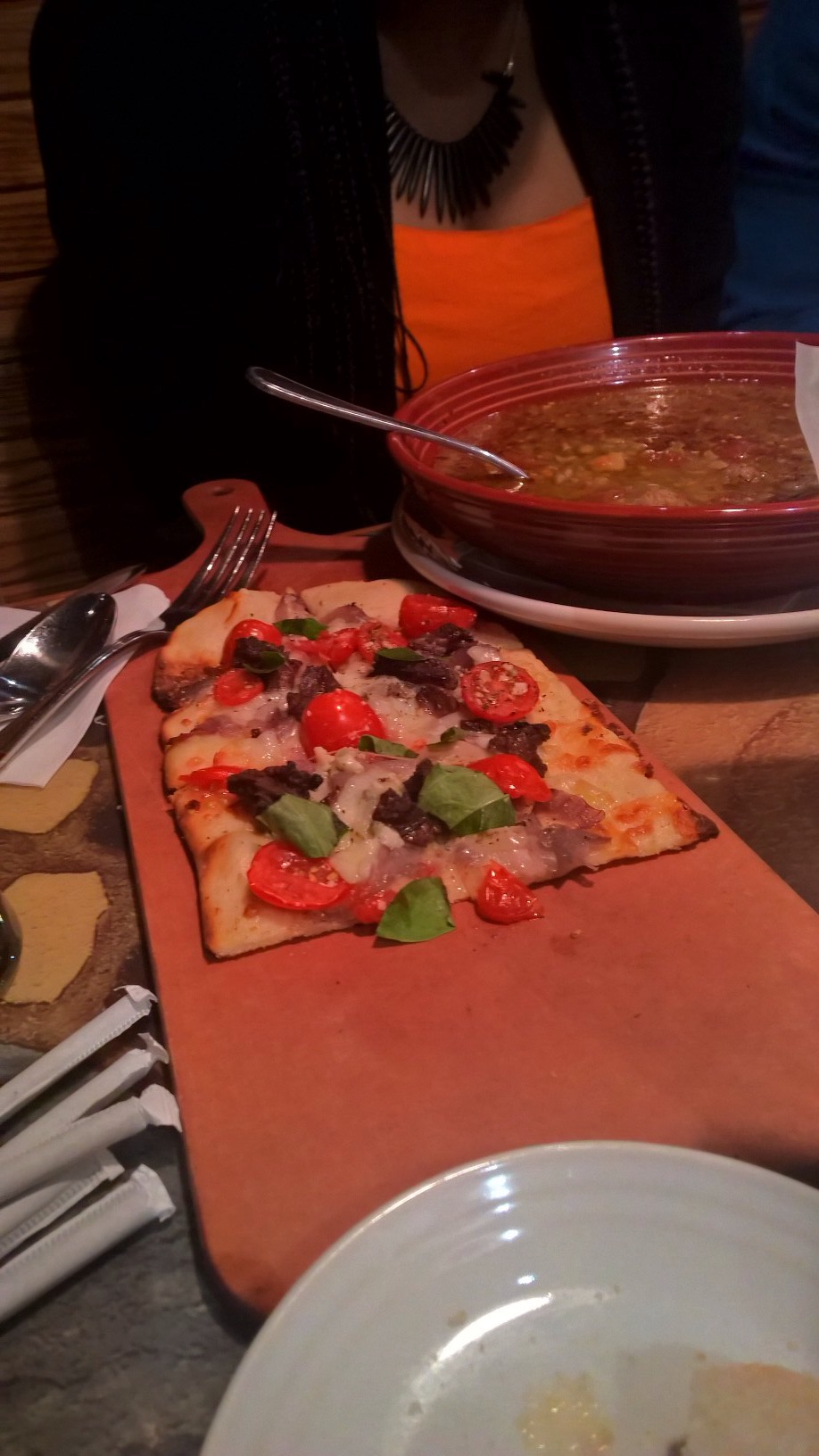 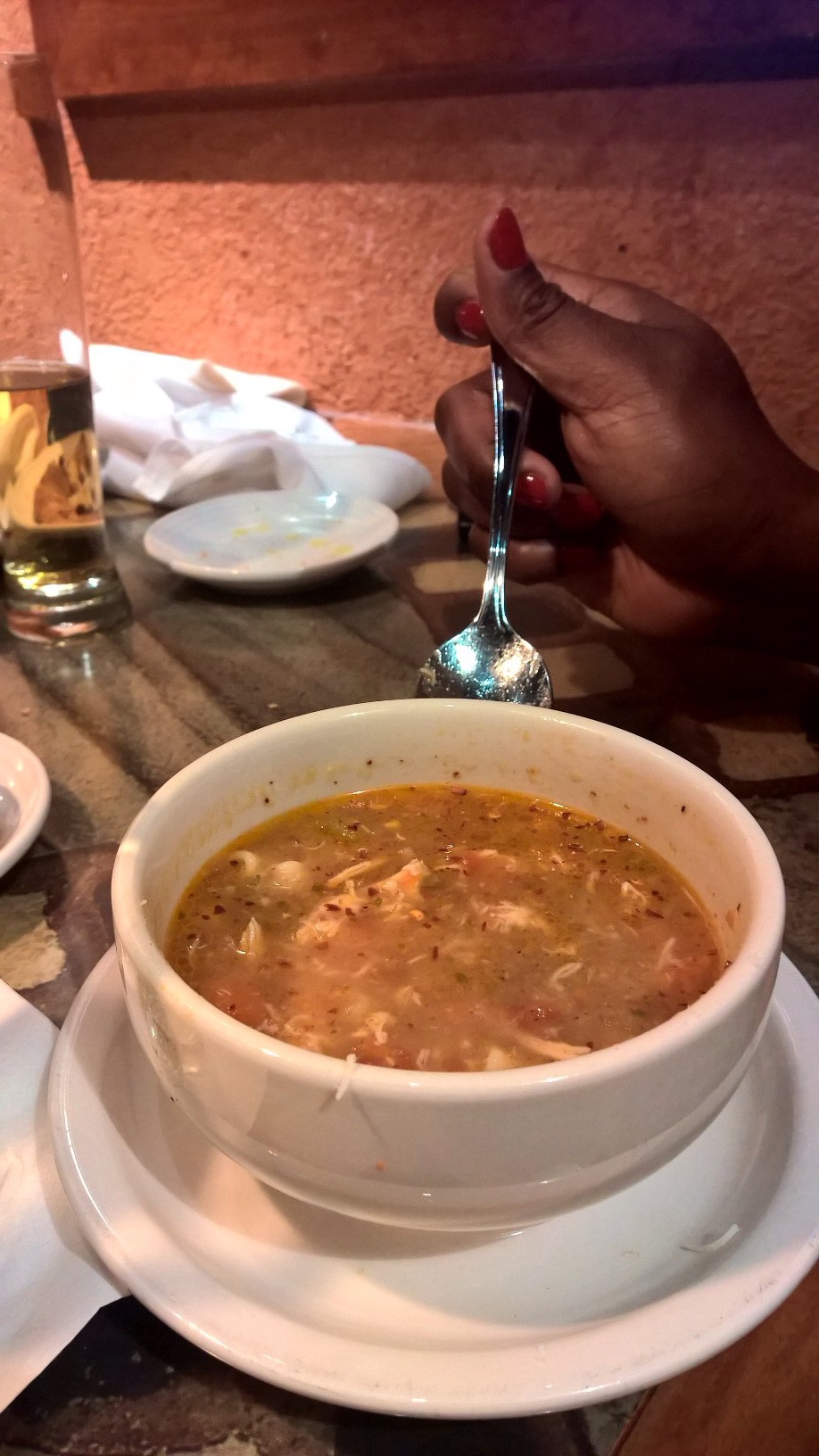 Stuffed, pleased and expectant, I returned to my hotel to prepare for the dinner my dad was hosting in honor of my fresh faced, bright eyed, bushy tailed, brand new graduate brother (Lawrence if you read this, you know I love you ?).

Dressed, and a few selfies after, I was ready to meet my dinner and fellow diners of course ?. 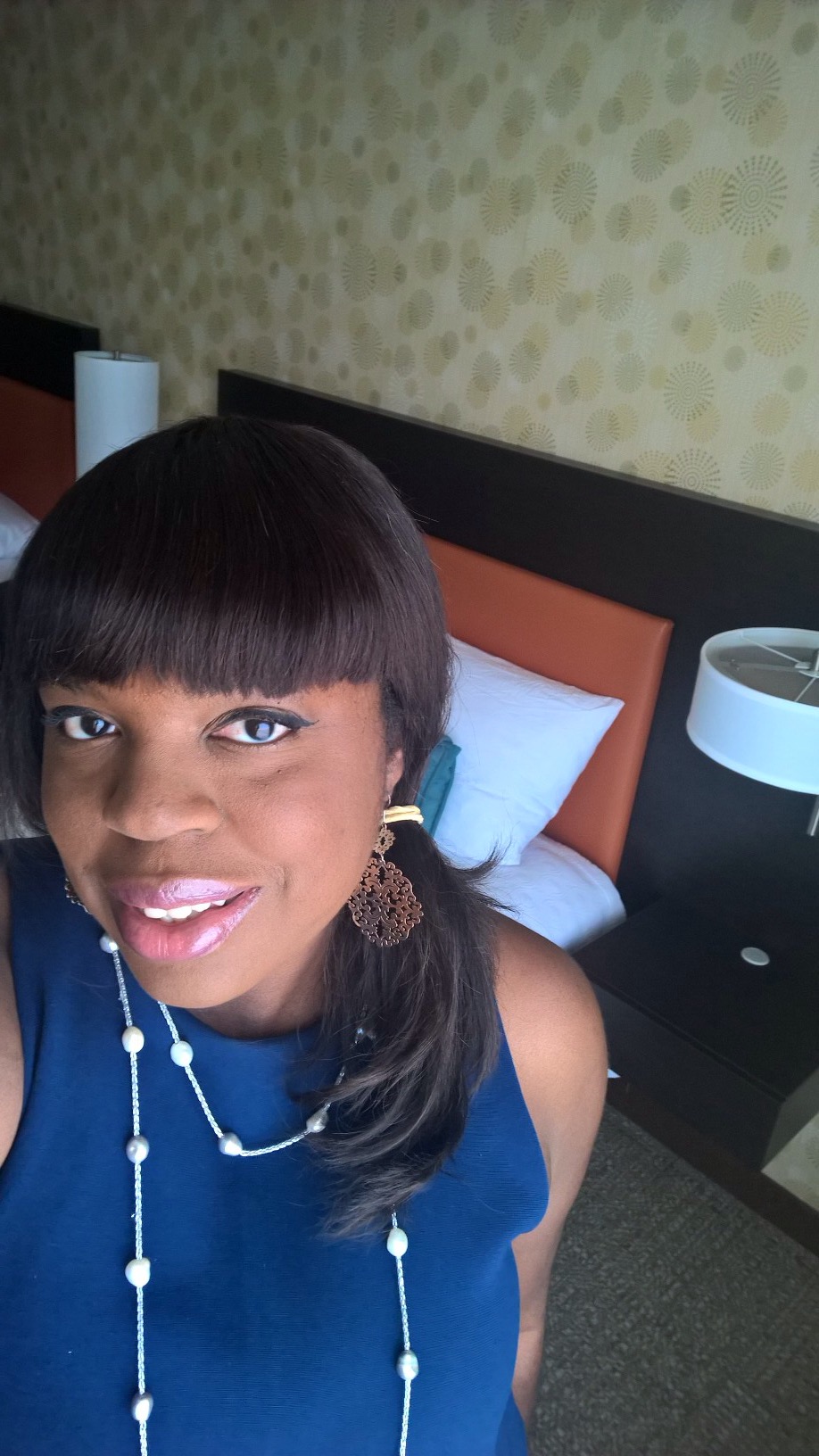 Dinner was grand; I thoroughly enjoyed it. There was laughter, there were tears as moving speeches were rendered by family and friends. The food lived up to its billing. We had diner at Black and Blue Steak and Crab. This restaurant had just the right ambience, it is modern and urban chic but not in an OTT way. And the food? So fresh and so delicious!

The waiting staff were courteous and attentive so I was never tempted even for a moment to rotten fish slap any of them. Having said that, I would have been hard pressed to find rotten fish in that location….

For starters, I had the crab cake. Let me tell you, the avocado lime aioli made this dish! The touch of watercress just added the right amount of freshness and pepperiness without overwhelming the crab. 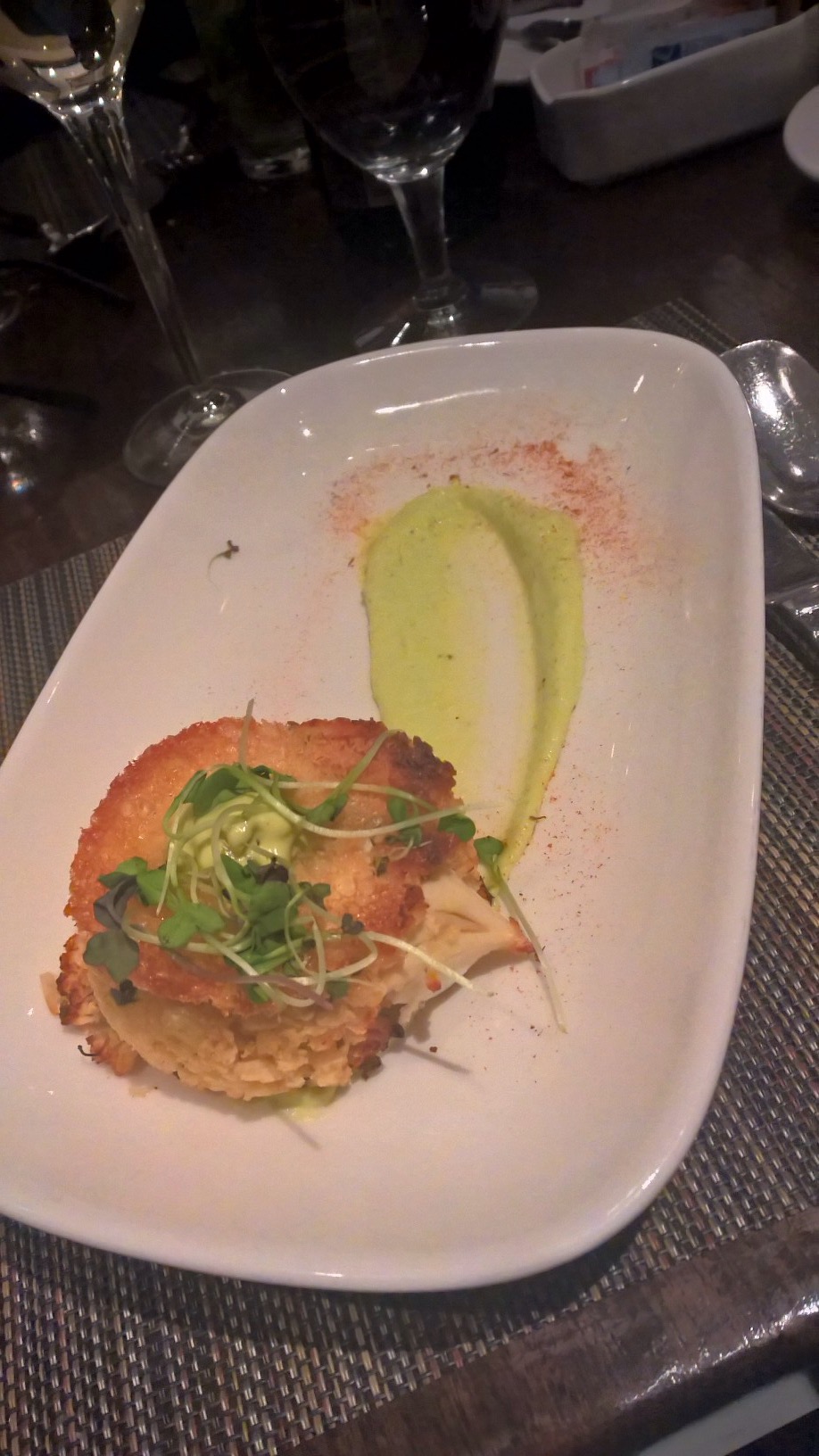 For my main course, I had a beautifully cooked ahi tuna. It was light, fresh and filling all at once. I didn’t want the meal, to end……but you know what they say about every good thing…….

We all had very good meals. Everything was beautifully presented and there was not a complaint around the table. 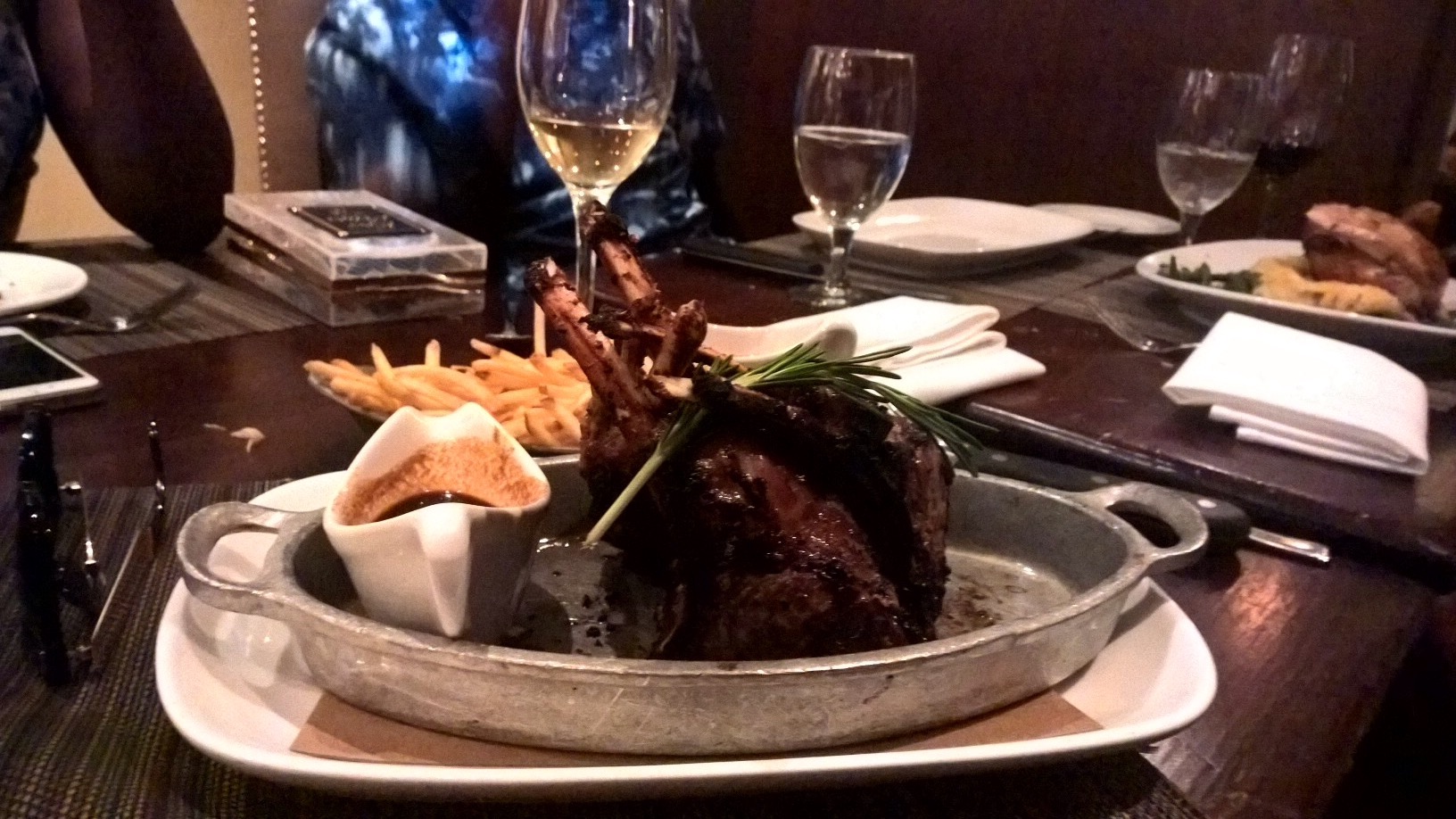 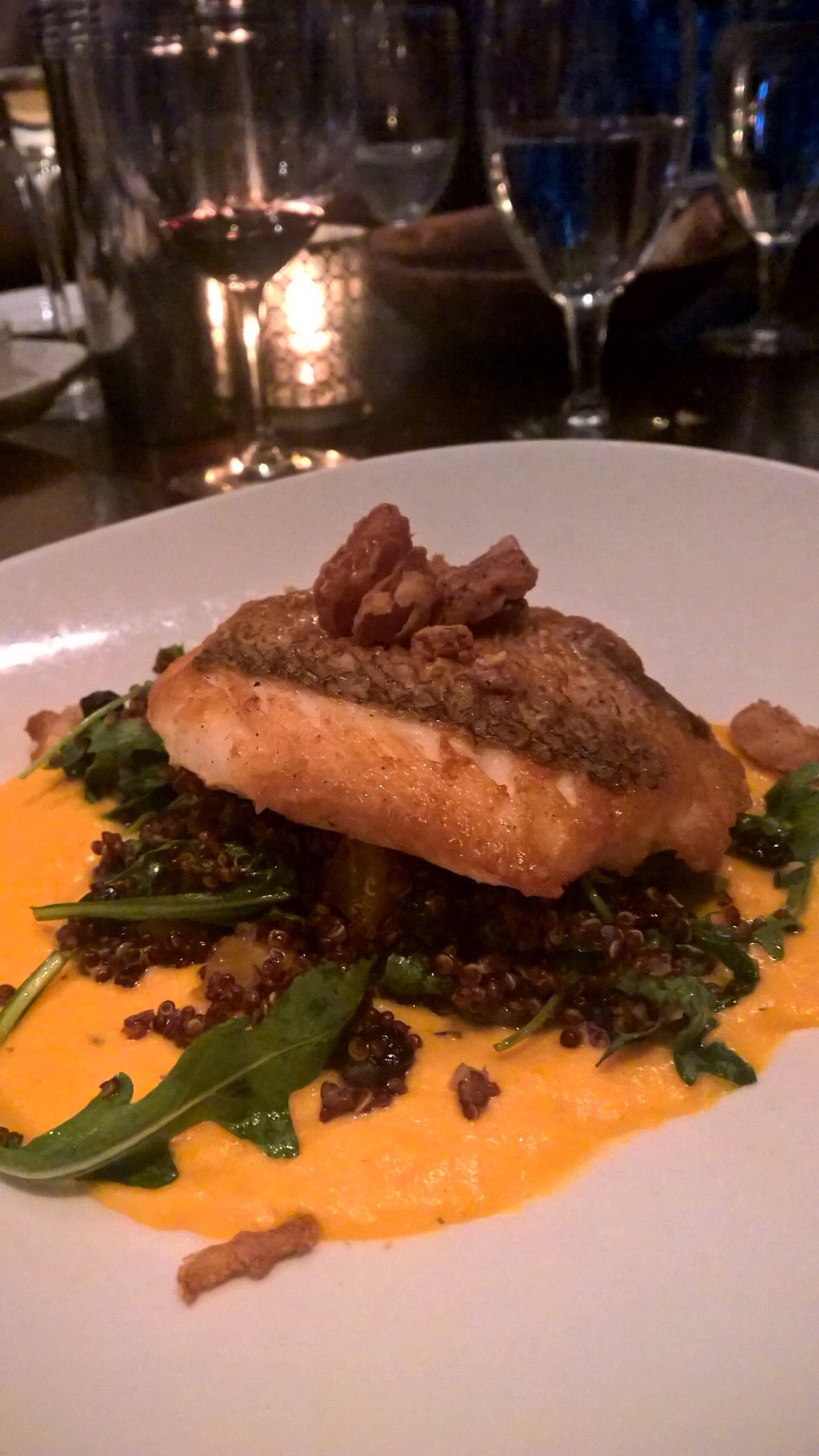 I assure you that I left in a state of food coma. Complete stupor! But I have NO regrets! None!

After the excitement of all the activities, we decided that Rochester had yielded all it had to offer us and so we packed up and embarked on a road trip to NYC! I was humming with excitement! Although after 6.5 hours I wasn’t  feeling much like humming. We did have one pit stop to be fair…which gave ample opportunities for more selfies ? And to fill up on the road trip food of choice – junk food. 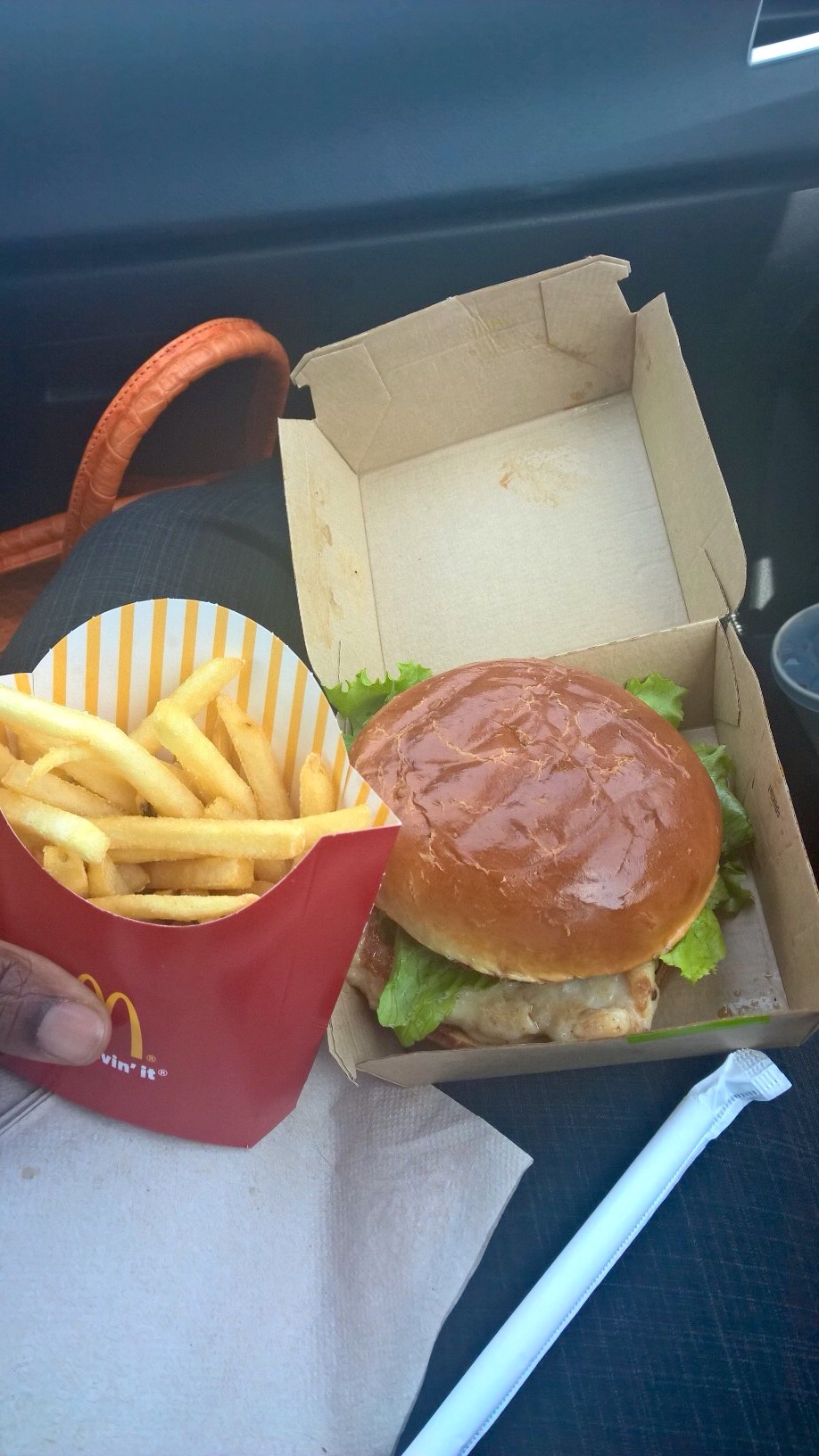 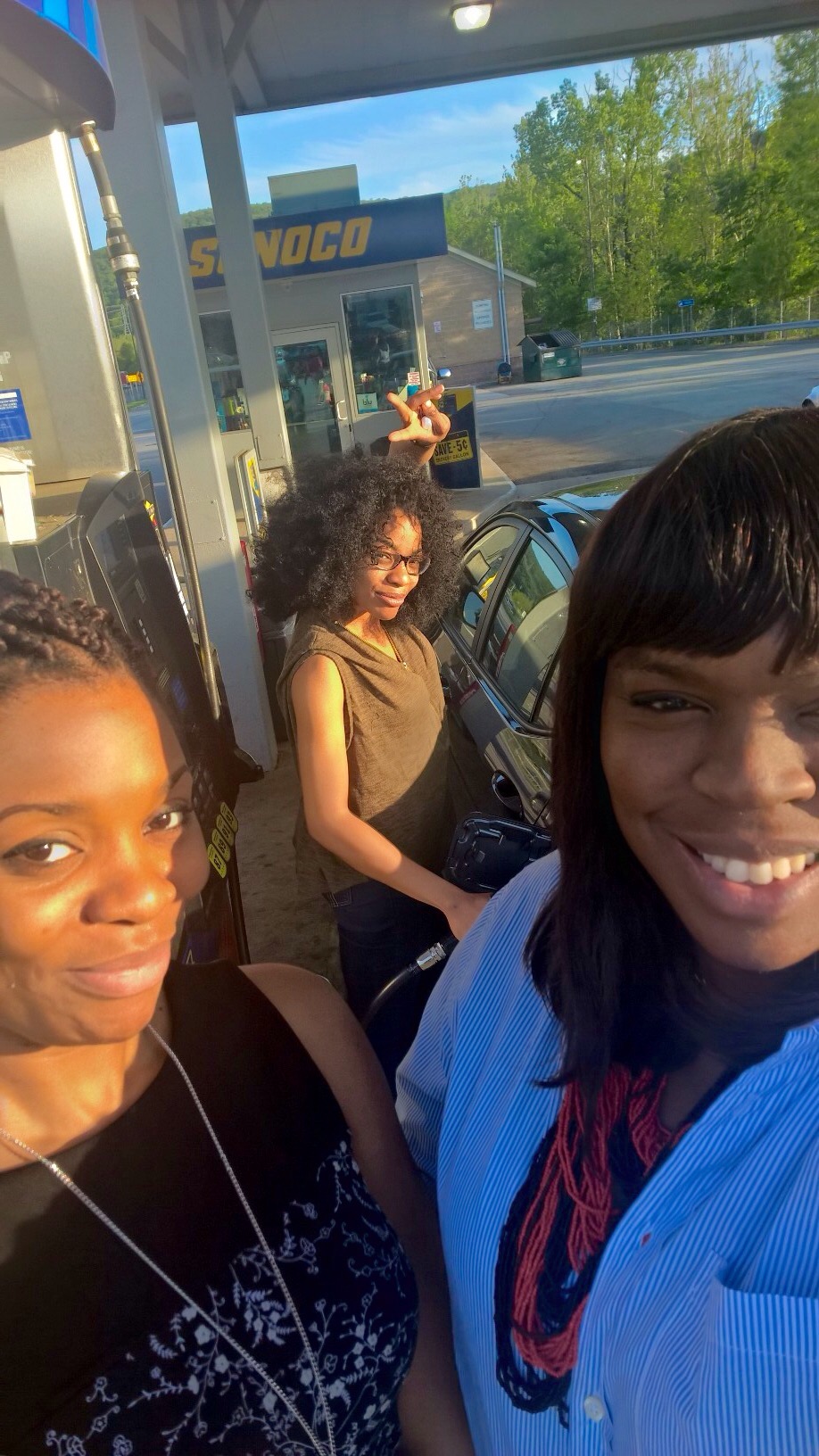 Refilled and refreshed, we entered New York City (NYC) just before sunset. It was quite beautiful to observe the city bathed in golden glow with Crimson and amber streaks in the sky.

My hotel was right on Times Square; The Westin. You know what that means right? ? Let’s just say we trawled the length and breath of the vicinity as much as our tired legs would allow us. 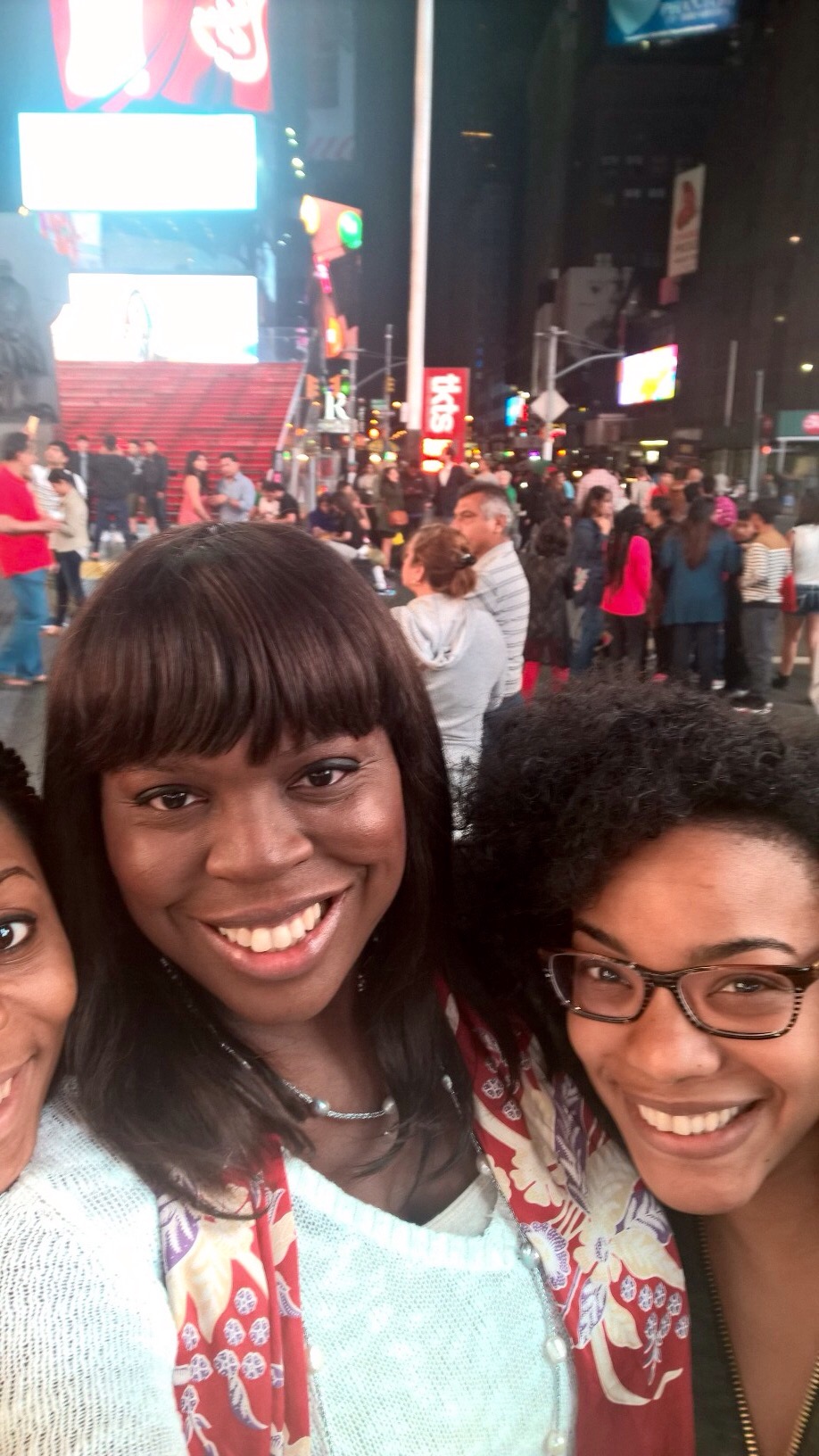 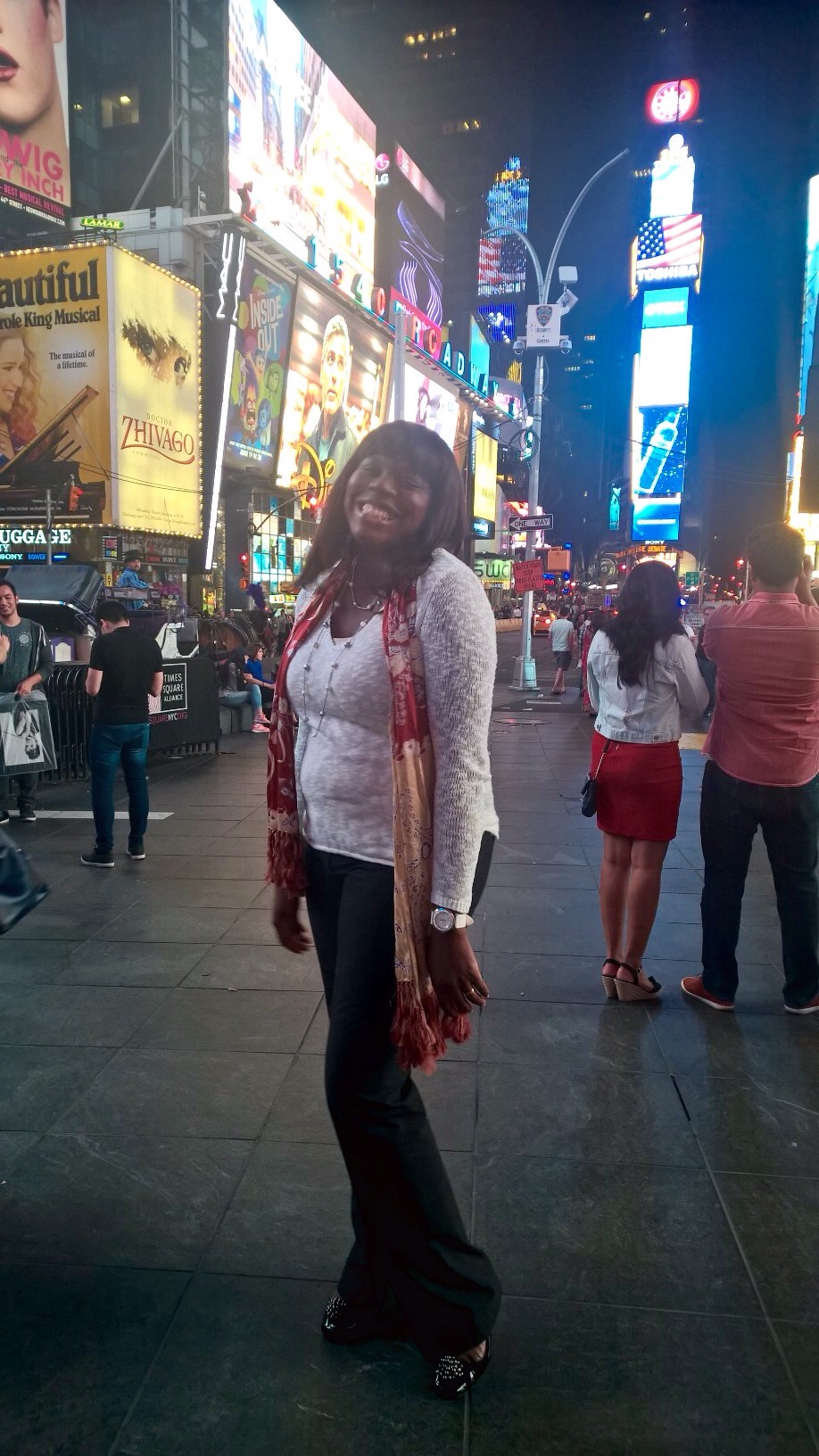 The absolute highlight of the evening was our shameless stint at Juniour’s. Please, if you love decadent desserts, more specifically cheesecakes, then you absolutely must go to a Juniour’s. I will let the pictures do the talking.

I justified my slice of cheesecake by telling myself that I would walk it off…..yeah right! ? I fell into bed at 1 am feeling extremely happy and mischievous. I just broke all my mealtime rules and I didn’t care! Liberating!

In the morning, I had breakfast with my dad at the Gourmet New York Marketplace. It’s a tiny little deli, buzzing with activity and filled all sorts of wholesome yummies. I settled fora a chicken Swiss cheese wrap, with a yoghurt and granola parfait (Topped with fresh fruit) and pepper mint tea.

I couldn’t down it all at once. So I saved half the wrap and munched on it later in my room, between, you guessed it! Taking more selfies! ?

That was my last meal in NYC as I was scheduled to fly out a few hours after; of course not before a quick traispe around. From the garment district to 48th street (and beyond if I remember correctly).

I enjoyed drinking in the sites and sounds of the city.  I hasten to add that I could have done without the assault to my olfactory lobes but I guess you can’t have it all.

And then it was all over, I packed up, said my farewells, got in a cab, took my last selfie and prepared for the long journey back home to my hubby and munchkins. But the best part of it all, was that I left feeling like I got a good taste of New York especially since I spent only 72 hours there.

Generally speaking, I can be quite nit – picky about where I eat and what I eat. From issues with mismatched cutlery, to horribly prepared food to less than courteous waiters; all these factors make me a very reluctant diner. I remember once, I went to a 4 star hotel in Abuja for dinner and as I sat down, I instantly noticed that the cutlery on the table was mismatched; I was baffled! Couldn’t a hotel of this “caliber” get place setting right? Don’t even get me started on a popular hotel in VIctoria Island, who’s meals I can barely put in my mouth.

Airline food? That’s a whole other set of problems! The rep is ……well…..lets just say……it’s legendary for being generally unpalatable and underseasoned.

So on a recent trip to the “concrete jungle where dreams are made of” I decided to chronicle some of the meals I had while airborne.

In no particular order, on the first leg of my trip, there was a nice fresh salad with seasonal vegetables and a good mix of dressings and vinaigrettes. My favorite though was the ensuing mezze. You will find out, in subsequent posts (and in a new book ?) all about my entanglements with mezzes.

This one didn’t disappoint; it was so fresh! The tabbouleh was on the money. The stuffed grape leaves were amazing. I loved it all.

Lovely salad and an even lovelier mezze

I then decided that I wanted a light main course and opted for the seared tiger prawn in parsley & garlic butter and Mediterranean vegetables. The prawns were moist and chunky. Everything was perfectly seasoned and all around delicious and fresh. So far I was a happy camper.

On another leg of the trip. I opted for another salad as a starter and a main of veal and potatoes. To be frank this meal was not memorable. The salad was fine but the main! What a train wreck! It look like pig’s slop and tasted like seasoned card board which is not saying a lot because it was just awful. I didn’t bother to eat the meal.

But the service was somewhat redeemed by the dessert…….

The dessert was a dark chocolate fondant in caramel sauce. Give me dark chocolate any day and I will be happy. So that was nice to have after eating cardboard.

One of the breakfast meals consisted of a grilled egg and bacon panini, cinnamon roll and Greek yoghurt. Everything was fine save that I found the cinnamon roll to be a tad dry.

The next series of meals came up with top marks; I enjoyed them thoroughly!

The seasonal salad was great but the real star was the asparagus with Burford brown egg and truffle dressing. It was earthy, fresh and delish.

The main was surprisingly delicious. I say surprising because it was a chilled meal and I wasn’t sure if I would enjoy cold cooked salmon. Also, I hadn’t ever eaten two of the ingredients described in menu. Well I was amazingly surprised. What a delicious plate of happiness. It was a dish of roasted salmon with Turkish spices, fregola, pomegranate seeds, parsley, mint and sumac.

Fregola is a type of pasta found in Sardinia and sumac is a wonderful tart spice used mostly in Middle Eastern  cooking.

The marriage of flavours was nothing short of magical! Can you tell from my empty plates? ?

Evidence of a well enjoyed meal

The magic flowed seamlessly into dessert of Somerset Camembert and Barber’s cheese served with fig relish and biscuits.

Dessert of biscuits, cheese and relish

At the end of the meal, I was well and truly stuffed, so much so that when the next meal was offered before we landed, I waved it off contentedly for there was no room. But more importantly, I didn’t want to ruin, what in my opinion, was a perfect gastronomic encounter.

I cannot wait to tell you all about the highs and lows of my food adventures in New York.